To ski or to snowboard, that is the question

The origin of skiing

Why did we start sliding around on snow?

In fact skis (or carved planks of wood) and snow shoes were invented before the wheel; there is evidence of ‘skis’ in 5000BC in Russia. They enabled hunters to travel across snow, wetlands and marshes come winter time. There was of course adaptations to the wooden planks, depending on the terrain of the region.

Why the change from cross-country to Alpine skiing?

There is a certain adrenaline rush from sliding down a mountain at a rate of knots. Not to mention a wonderful way of getting around a mountain range: there is a whole world to discover. Rope tows and then the invention of lifts made downhill skiing all the more popular. Fresh air, exercise, panoramic views and, of course, Alpine food.

In Europe adorable restaurants, some original alpages (high alpine huts for cows in the summer), litter the mountain sides. Sit and rest, looking out on the beautiful Alps with a beverage and home-cooked traditional food. What’s not to like?

There is a background of animosity between skiers and snowboarders. There was a time when snowboarders were not welcomed onto the lifts in some resorts! Snowboarding started to become popular around 1985, when it was the minority sport on the mountain but boomed by 2008. I think (I hope) that any bad feeling has been quashed some what. 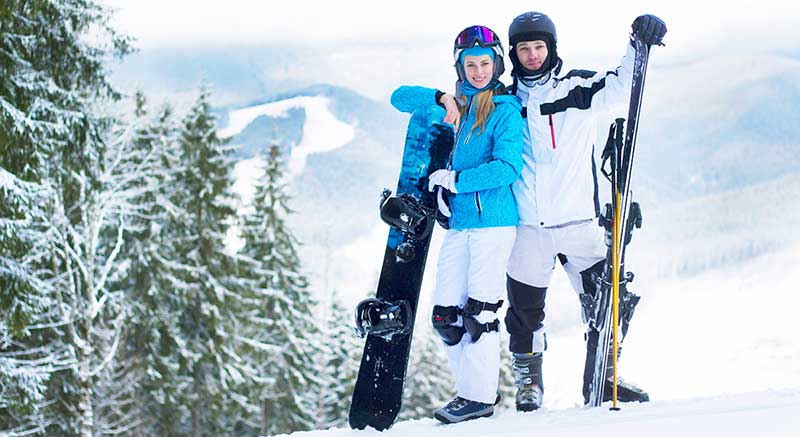 Should I learn snowboarding or skiing?

Boarding is hard to learn, taking more than a day to stand up at all; and can be fairly painful on the coccyx. However most snowboarders are able to start tricks sooner than they would on skis. With two feet strapped in boarders can find themselves catching ‘an edge’ and falling quickly, unable to correct themselves until they are more experienced. At the beginning of your snowboarding career there will be bruises.

The learning curve for skiers is steeper. As a skier you are generally able to stand up and get down a small hill on the first day without a fall, as long as you remember not to lean backwards. You can move around and generally feel like you can ski from lift to lift. For most skiing is a more natural way of first getting on a mountain, because your legs are independent to each other. However skilful skiing is technical.

Skiing can be more enjoyable than snowboarding on harder, icy pistes because you have more edges and your skis will generally be longer, giving better connection to the surface. Skiing is also useful for more technical touring; clipping in is easier or you can use touring skis to skin up a mountain.

However skiing’s counterpart, snowboarding, is so much fun when smashing up big powder fields and jibbing around on a soft piste.

So why not both snowboard and ski?

Days on the mountain can be very different depending on snow conditions, ice and sunshine. I started as a boarder and was soon interested in skiing. To me there is a huge contrast between the two and anyone that does not do a bit of both is missing out. I see variety as a wonderful thing. Boarding and skiing are very different and both are pretty cool!

What are your thoughts? When do you like to ski or to board?